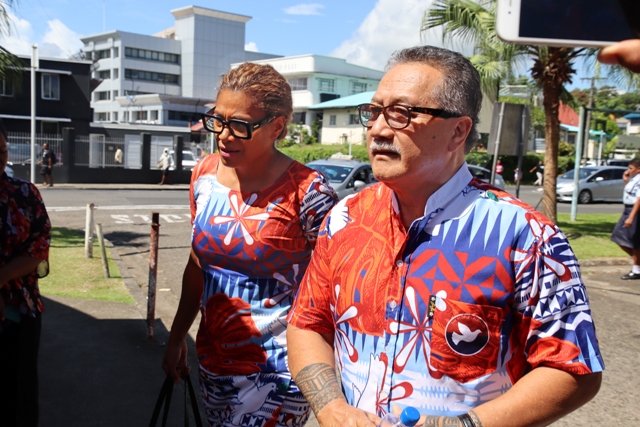 Daniel Lobendahn and Lynda Tabuya have been jointly charged by the Fiji Independent Commission (FICAC) and were produced at the Suva Magistrates Court on Tuesday, 6 December 2022.

Under Section 114 of the Electoral Act, it is prohibited to offer money to citizens to gain or influence votes.

It is alleged that on or about 14 May 2022, Lobendahn and Tabuya used the Rock The Vote volleyball tournament and offered prize money totally FJD $1000 whilst soliciting votes for each other at the commencement of the tournament.

The offence occurred whilst Lobendahn and Tabuya were the Deputy Leaders and provisional candidates for The People’s Alliance Party.

The Fijian Elections Office received the initial complaint and referred the matter to FICAC under the Electoral Act to conduct investigations and prosecution.

Investigations into the matter commenced upon receiving the complaint however was delayed as video evidence of the alleged incident which was live streamed on Facebook by Daniel Lobendahn and Lynda Tabuya were deleted from their electronic devices and their Facebook Pages.

As such, the investigators had to retrieve the deleted video evidence which consumed more time.

FICAC State Counsel Mr Darren Hickes informed the Court that the first phase of disclosures has been served.

Resident Magistrate Kiran granted a non-cash bail of FJD $750 and ordered Lobendahn and Tabuya not to re-offend whilst on bail.

Daniel Lobendahn and Lynda Tabuya were also ordered not to interfere with state witnesses, not to change their residential addresses without first informing the Court and to surrender all travel documents.

Lobendahn and Tabuya are to report to the Raiwaqa Police Station on the last Friday of every month from 8am to 6pm effective from January 2023.

A stop departure order has been issued against Daniel Lobendahn and Lynda Tabuya.

The matter has been adjourned to 10 February 2023 at the Nasinu Magistrates Court.